Jim Shumate to be inducted into the Blue Ridge Hall of Fame! 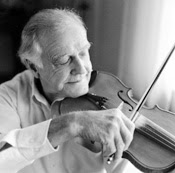 There have been a lot great fiddle players over the years. Some of the ones I like most are Posey Rorer, Charley LaPrade, Paul Warren and J.E. Mainer. That’s a woefully incomplete list of fiddlers, and you’ve probably guessed that I’m partial to the old-time guys.


Well, there’s one fiddler who hasn’t had a lot of mainstream press, but is one of the most influential (and many say the best) of the bluegrass fiddle players who has roots in the old-timey styles.

He’s Jim Shumate of Hickory, and he’ll be inducted into the Blue Ridge Hall of Fame in Wilkes County.

Bluegrass isn’t that old. It came along in the mid-1930s, just in time for the fabled Robert Johnson to explore the infant musical style. Johnson, known for his blues (and being one of the most influential artists ever), dabbled in bluegrass before he died in 1938.

It was Bill Monroe who started the fire that today burns brighter than ever. Shumate was once the fiddler in Monroe’s Bluegrass Boys, at the time when Earl Scruggs and Lester Flatt were with the group

Now, ol’ Bill was a taskmaster. Everything had to be just right. He didn’t cotton to foolin’ around on stage. His way of thinking was that the audience spent good money to see a good show and that’s what the folks were going to get. Monroe figured out what music energized a crowd, what animated people and what gave ‘em the dreamy, I-remember look.

He knew bluegrass was just the ticket.

So how good was Shumate? Good enough that the first time he was at the Grand Ole Opry (1944), the Bluegrass Boys opened the show and the first licks were Shumate doing the Opry theme song. Monroe thought Shumate was good. Real good.

Shumate didn’t record a lot. “The process was so tedious,” he recalled in a interview several years ago. And he really didn’t like the grind of road trips. Six years after Monroe first heard him play on WHKY Radio in 1943, Shumate came home for good.

However, he has a plaque hanging in the Bluegrass Hall of Fame in Nashville.

Shumate’s time with Monroe was critical for bluegrass music, a reality not lost on the fiddle great. He once mused, “Once we (the Bluegrass Boys) got started, it (bluegrass) didn’t take long to get going after that. When we were at the Opry, everybody was trying to do it just like we did. I said, ‘I don’t know what it is, but we’re making some kind of history.’ We just sort of laughed it off. Bill Monroe was the backbone of it. I know that. He is one fine fella to work for.”

As long as you deliver, and nobody every accused Jim Shumate of not delivering his best. He’s still remembered and revered by veteran performers and devotees of bluegrass.

Listen and watch closely: That’s Shumate on Lester and Earl’s “The Mercury Sessions” and the dynamic duo’s TV variety show. He was featured in “High Lonesome: The Story of Bluegrass Music,” a film by Northside Films of Brooklyn

Ah, so you have heard of him! Don’t get the impression that I know him. I met him one time and then only because a coworker was doing a story. So I did some checking up on Shumate. By the time I was done, I knew he was the real deal

The miracle of modern technology made studio recording less tedious, and Shumate has cut a couple of albums. If you find “Buckle Up The Backstrap,” grab it. Same goes to “Up And At ‘Em.” And he performed at various venues and conducted fiddle workshops for years, as long as there wasn’t too much travel time involved.

Let’s see. He was 70 in 1993 when he recorded “Buckle Up.” Hmmm. It’s about time to honor him with induction at the Blue Ridge Hall of Fame on June 11. Shumate will be enshrined with Emmylou Harris, Jens Kruger, Jim Lauderdale and Willard Watson.

Shumate is scheduled to perform. If you go, hang on to your hat. He’s not going into the great hall because he’s ordinary. Hey, he’s got a plaque in Nashville. Bill Monroe turned him loose on his very first note at the Opry.

The Wilkes County boy who learned to play from his brother and his uncle and memorized every stop and note Arthur Smith and Sam Kirk McGee could do favored home over fame. But he isn’t forgotten. Besides, Shumate never looked at his ability as a way to get rich and grab glory.

“It’s a gift from God,” he once said. It’s a gift he’s shared for decades. It’s good knowledgeable people know he deserves recognition.
Posted by Tom Thomas at 9:24 AM